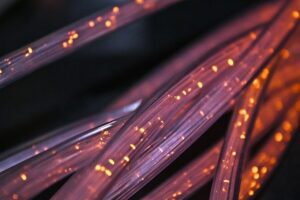 The variety of fiber optic cables requires their proper selection, installation, and maintenance to optimize it. Optical fibers are flexible and they allow installing fiber optic probes for remote measurement at numerous points with one device, significantly reducing cost. Moreover, optical fibers matched to the spectroscopic analyzer system enable us to reach optimal performance results.

You should pay careful attention to the following parameters when choosing the right fiber optic cables:

Various core diameters of optical fibers are distinguished, for instance, single-mode fiber is about 6 µm in diameter, while multimode optical fiber is up to 1000 µm in diameter. The thing is that huge core fiber costs higher, it has less flexibility and a higher attenuation rate with distance but such optical fiber allows transmitting more light and providing a better signal-to-noise ratio.

It is necessary to install the analyzer far enough away from the hazardous process to be safe, however, close enough to make the optical fiber run practical from cost and performance points of view because fiber optic cables are quite expensive. Thus, the cost depends on the distance required for the optical fiber significantly if it is installed in a protective conduit.

Proper installation of fiber optic cables is recommended for better performance. Also, it is necessary to avoid sharp bends as well as vibrations. They can evoke noise in the signal because they are a form of micro-bend losses. The most important thing is the correct termination of fiber cables. For optimal application in spectroscopic applications, the connectors of optical fibers must be polished to perfection, be flat, square-ended, and have the correct length.

Optromix is a provider of top quality special fibers and broad spectra optical fiber solutions. The company delivers the best quality special fibers and fiber cables, fiber optic bundles, spectroscopy fiber optic probes, probe couplers, and accessories for process spectroscopy to clients. If you have any questions or would like to buy an optical fiber product, please contact us at info@optromix.com

Optical fibers are flexible waveguides of the optical range. Usually made of some kind of glass, they can potentially be very long (achieving hundreds of kilometers). Quartz glass is most often used for the manufacture of optical fibers because of its unique properties, in particular:

They less commonly use fibers that implement a different principle of light retention in them. Such optical fibers are based on the fiber Bragg grating structures and photonic crystals to form a photonic stop-band. This technique is fundamentally different from the method of retaining light in conventional fibers.

Since the maximum reflection wavelength depends not only on the Bragg grating period but also on temperature and mechanical stresses, fiber Bragg gratings can be used in temperature and stress sensors. Transverse stresses compress the optical fibers of gratings between two flat plates, inducing birefringence and thus causing the Bragg wavelength to depend on polarization.

Nowadays new fiber laser technology allows transmitting multikilowatt power, ultrashort pulse durations, repetition rates up to 1 GHz, and high laser beam quality in a compact version. The thing is that the ultrafast laser system with pulse durations in the femtosecond and picosecond range is widely used in numerous industrial processes.

The thing is that current fiber optic technologies promote creating new configurations as well, however, the cost of solid-state gain material is high, combined with thermal management challenges cause crucial obstacles to its widespread application. The popularity of pulsed laser systems increases every day. Solid-state, disk, and fiber lasers are considered to be the most potential versions for high-average-power generation, herein, fiber laser systems are in advance.

Nevertheless, even amplifiers based on fiber optic technology can provoke very high optical peak intensities leading to detrimental nonlinear laser beam pulse distortion or even destruction of the gain medium or other optical fiber elements. Moreover, there are various nonlinear effects (self-phase modulation, stimulated Raman scattering, mode instabilities, and poor output laser beam quality) that increase in pulsed high-power laser systems limiting their performance. The promising solution is the increase in the core diameter of the optical fiber.

Founded in 1898, the Canadian Institute of Mining, Metallurgy, and Petroleum (CIM) is the leading technical society of professionals in the Canadian Minerals, Metals, Materials and Energy Industries.

Fibreglass exterior doors won’t delaminate, split or rot like wood. They offer an advantage in that fiberglass can easily be manufactured in a wider variety of shapes, textures, and new design treatments, down to accurately replicating real wood grain

The friends set themselves the challenge of learning a language in a week in order to stretch themselves, and then it was a question of choosing which language to learn. English presented itself as a natural option; there are nigh on 300,000 English speakers in Germany’s capital, and the areas are dotted with stores adorned with signs in English.

The first operational step in the friends learning process was to decorate the entire apartment with sticky notes. This had an almost ceremonial touch to it as the friends delved into dictionaries and proceeded to label everything with its corresponding English name.

Within the space of about an hour it was impossible to carry out any menial task, be it making a coffee or flicking off a light switch, without first being presented with at least three different words related to this action.

The importance of the other twin’s presence became immediately apparent as Katy and Sara delegated responsibilities for rooms to decorate with sticky notes. This simple task was augmented by continuous little tests that they would spring on one another, and the fact that they split up their day slightly differently and studied different topics meant that each twin became a source of knowledge for the other.

The most extraordinary moment came towards the end of the week!

The friends simply switched their everyday conversations to English, asking one another if they wanted tea or coffee, were ready to cook dinner or when they were going to leave the house.

Katy and Sara had numerous micro-challenges throughout the week. On the first day they were visited by a English friend who greeted them in English and complimented them on how quickly they’d picked up their first words and phrases.

They then learned the names of fruits and the numbers from one to a billion so that they could visit the English market (although they refrained from purchasing nine hundred thousand kumquats). Displaying their haul after their first functional exchange in English, they beamed with pride and a palpable sense of accomplishment before marching back home to study further.

On our second visit to the brother’s apartment 24 hours into the week, we found them sampling dozens of different kinds of English snacks.

Like kids staring at the backs of cereal packs before heading to school, the nutritional information and various special offers and competitions on the packaging were analysed during snack breaks.

There was no moment of complete removal from the language learning process during the eight hours that the friends had allotted to it.

They were constantly using their existing knowledge to support the ever-growing knowledge of English, this being the root of their success.

The friends spent a lot of time engrossed in books or on their computers and apps, flicking and swiping their way through exercises eagerly, but at other times they were to be found searching busily for English radio stations and write-ups of English football games on the web.

All too often, people enter their weekly language class to converse with their teacher, but then barely have any contact with other speakers and that’s not enough.

The old saying that we can solve problems more effectively when we sleep on it may be especially true if the problem we’re trying to solve is learning a new language.

The researchers added a techie dimension by conducting electroencephalographic (EEG)recordings of the sleeping participants brains to track neural electrical activity during the learning period.

They found that learning the foreign words overlapped with the appearance of theta brain waves, an intriguing result since theta is the brain wave state often associated with heightened learning while awake (usually we’re in either the high-frequency, high-alertness alpha or beta states while awake, but it’s thought possible to induce theta state slower in frequency than alpha and beta through concentration techniques).