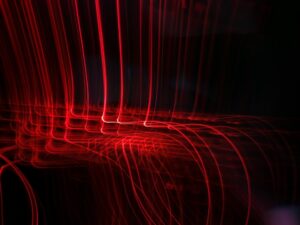 According to the last research, now it has become possible to design accessible laser systems that are able to emit laser beams of a wide range of colors resulting in new fields of applications from communications and sensing systems to displays. Thus, researchers from Japan have developed an optically pumped organic thin-film laser module that allows continuously producing laser beam light for 30 ms that is about 100 times longer than previously used laser devices.

Compared to conventional inorganic laser systems (used in CD drives and laser pointers), the principle of organic thin-film laser module’s operation is based on a thin layer of organic molecules as the laser medium that emits laser beams by producing and intensifying light during the excitement of an energy source. Herewith, an intense ultraviolet laser beam light from an inorganic laser system is regarded as the energy source.

Additionally, the organic laser system is highly potential because it offers such an advantage as the opportunity to more easily reach colors that are virtually impossible with inorganic laser devices. It should be noted that “by designing and synthesizing molecules with new structures, laser beam emission of any color of the rainbow is possible.” Although organic thin-film laser systems have been studied for a long time, such features as degradation and loss processes have significantly restricted the duration of laser beam emission.

Nonetheless, the researchers succeeded to overcome the mentioned challenges and enlarge the duration of the laser system process by unifying three strategies:

These laser systems can be used in extreme environments, that is why searching for new laser techniques to take away any inefficiencies and prevent laser devices from overheating. Moreover, the combination of the organic laser modules with inorganic ones enables the production of colors that are difficult to create by employing a conventional type of lasers, with applications in process spectroscopy, communications, displays, and sensing systems.